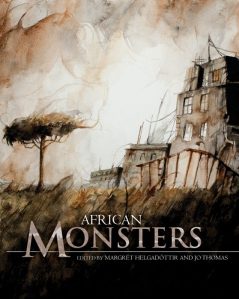 Welcome back to Bite-size Reads, where it’s my final round-up of the dark and haunting tales of African Monsters, edited by Margrét Helgadóttir and Jo Thomas.

This week includes one of my overall favourites and a graphic novelette, with themes that include coming of age and colonial violence.

It took me several attempts to get into this oddly coy tale, narrated by a man so obnoxiously self-satisfied I was soon rooting against him. It’s initially (deliberately) unclear what he is – spy, hitman, agent provocateur – and de Burgh takes his time unfurling a plot of unfinished business. When he does, it’s fascinating (although the narrator is still unbearable), but in the end the world and its implications are more interesting than what we eventually see – partly because de Burgh chooses not to show very much. Were creatures do battle in Zanzibar: but not on page. It feels like a missed opportunity, not least because there’s no other arc or throughline either.

A Whisper In The Reeds– Nerine Dorman

A bored young man doesn’t heed the warnings implicit in his older lover’s tales of past heartbreak. Dorman’s storytelling reminds me of (my admittedly now very faint memories of) The Cement Garden: languid days of heat and resentment, interrupted by seductive water spirits. Unfortunately, this atmospheric build-up delivers a sudden end rather than a satisfying climax. The bones are good, but they needed a bit more flesh on them for me.

As we approach the end of the anthology, I found a new favourite to supplant the opening story (On The Road). The setting is post-apocalyptic following a dystopian tragedy of human greed and institutional ineffectiveness; the context is researchers trying to make money; and the mood is lesbian longing as they swap stories around the camp fire. There’s so much packed into this story – the rich white boyfriend; the weight of bloodlines and family expectation; the human and supernatural threats that surround them. It’s a story I already want to revisit as I’m sure I’ll find it reads quite differently when you know where it’s going… Great stuff.

A little girl is determined to find the end of the rainbow, because she’s heard you can find a pot of gold there. But that’s a white man’s story, and this is Africa: instead of a leprechaun, she finds a tokoloshe. This is a well-crafted coming of age tale that explores the bitter differences between white stories and black experiences. I loved the full-throated rage at the end; and the occasional grace notes in the prose on the way there (“She had a hacking laugh that tore happy holes in the world” will stay with me for some time).

The anthology closes with a graphic short story (in the sense of illustrated panels, not gore). Here we get many monsters: the setting is apartheid South Africa, with a white boy moving from England to a world characterised by racism, inequality and violence. He too has a bad time of it – beaten by schoolmasters, bullied mercilessly – as he is slowly drawn towards a climactic decision. This reminded me a little of Chalk, and often makes for uncomfortable reading.

It’s a strong finish to a collection that took a little while to find its feet but has given me lots to think about (and introduced me to some new monsters!) I’m excited to continue my journey around the world with the Fox Spirit Book of Monsters – I’ll be picking up Asian Monsters at some point over the winter.

Next up for Bite-size Reads (all going to plan) will be This Dreaming Isle edited by Dan Coxon for Unsung Stories.

I received a free copy of AFRICAN MONSTERS from the editor. This did not influence the content of my (very overdue) review.