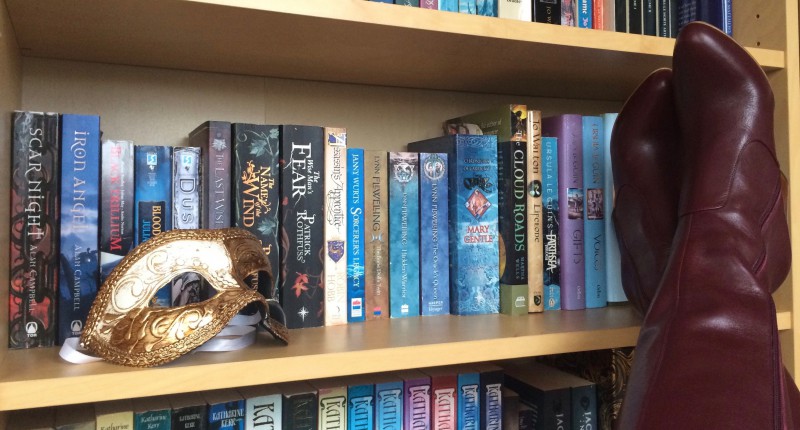 March was difficult with a capital D, thanks to a combination of family drama (a close relative nearly died, but is thankfully on the mend), brain weasels and illness. On the plus side, my scrambled brain didn’t stop me reading for once, so I put my head down and made progress on my Subjective Chaos reading list – and even my backlog – resulting in 3 of my favourite reads of 2022 so far.

It feels like years since I read Meet Me In Another Life – Catriona Silvey’s debut rockets on to my list of 2022 Top Reads. Pretty much everything I thought I knew about this book was wrong – this is not a parallel worlds’ romance, but rather a series of beautifully written character vignettes that eventually deliver an SFnal subplot to tie everything together – and so I enjoyed it exponentially more than I expected.

One Day All This Will Be Yours is a satirical time travel novella which joins almost everything other book by Adrian Tchaikovsky on the “I can see why other people like this, but it is Not For Me” shelf. Conversely, Calvin Kasulke’s Several People Are Typing may have actually been written with me in mind: it is an absurdist romp as a junior PR guy finds himself uploaded to the company Slack in the middle of a client crisis. Sheer delight.

CL Polk’s Witchmark delivered another high, with excellent fantasy intrigue and delightful characters in a secondary world. I loved the early 20th century vibe (bring me more bikes in fantasy, I love it) and even the teasing of the romantic subplot; largely because protagonist Miles is adorable (I found Tristan far less interesting than Grace and Robin, although he’s cute enough).

Girls Of Paper And Fire is objectively excellent: a slow-paced, high-tension, f/f romantic drama in an Asian-inspired world. I liked both that the protagonist isn’t the vengeance-fuelled orphan with unusual abilities, and that her strengths are rooted in love. I’m still not very interested in romantic drama with teen protagonists though, even when it does a good job of tackling themes of sexual assault and rape (this novel is content warnings all the way down, starting with gratuitous animal death on about page three) while centering unexpected female friendships.

Last up in this exceptional month was The Echo Wife by Sarah Gailey, which I’m distraught I didn’t read sooner as I would have nominated it for Subjective Chaos. This nasty little murder/clone drama is brilliant, with an entirely unlikeable protagonist and a villain who only gets worse by the chapter; the genius is in how Gailey teased out my sympathies for both. Short, spiteful and very satisfying. I’m delighted to hear it’s been optioned by Annapurna Pictures, whose pedigree is perfect for delivering this to screen.

I’m filing Tower of Mud and Straw by Yaroslav Barsukov under DNF For Now. Objectively, the novella has good ingredients; subjectively, it left me cold. I felt it was trying to do too much and fell flat in both character and world-building (and clunky dialogue, yikes). I was also irritated that of the three female characters, one was motivationally dead and another appeared to be a femme fatale, although I liked the all-business female engineer.

Don’t be deceived – this month’s backlog reviews were mostly written last month; I’ve done a rubbish job of reviewing anything in March!

March was the month where I lost my battle with willpower and requested a heap of ARCs. I’m not feeling particularly guilty about this, although I’m sure that’ll kick in alongside the panic when I look at the release dates. AAAAAAAH THE RELEASE DATES. Ahem.

My primary goal – always – is to read diversely and to love every book. This year, I plan to focus on reading what I already own and flip the percentages of reading recent acquisitions vs off the shelf (so I am making very careful decisions about what books to buy and ARCs to request).

* I only track DNFs where I made significant in-roads into the book – rapid bounces don’t count. Percentages are calculated across both completed reads and declared DNFs.

I track my author mix to keep me honest and I share it for those who are curious. This year, I’m also tracking publishers to see how many books are from small presses / independents (I may try to distinguish between the two, as Bloomsbury operate on a very different scale to, say, Rebellion – let alone Louise Walters Books! As my reading will be dominated by what’s on my shelf, this will set a handy benchmark for what may become a target in 2023…

Challenges took a back seat this month, with just the one new backlist read.

#TidyTheTBR with Runalong Womble | Join in on Storygraph

I’m claiming The Echo Wife for this month’s prompt (oaths, vows and promises), as it is full of betrayals and broken promises with a side of revenge.

Prompts completed: The occult: Piranesi | Death: How High We Go In The Dark | Rocket: Far From The Light Of Heaven | Ex libris: The God of Lost Words | The house: What Abigail Did Last Summer | Watch: This Is Our Undoing | Witch: Witchmark

It’s nearly Easter, which I plan to spend in the garden and with my nose in Subjective Chaos novella nominees. And then? Then it’s Wyrd and Wonder! Sign up is now open if you want to join our adventuring crew and spend May revelling in your love of the fantasy genre with with us. Those who sign up and post during the first week of the event can enter a giveaway to win a paperback copy of the amazing Winnowing Flame trilogy by Jen Williams – one of my absolute favourite epic fantasies of recent years. We’ve got two new co-hosts along for the ride (shout out to Annemieke and Ariana, who have dived in with a will behind the scenes) and big plans (some of which we’ve already shared, but watch out for more news next week!).

How was your March?