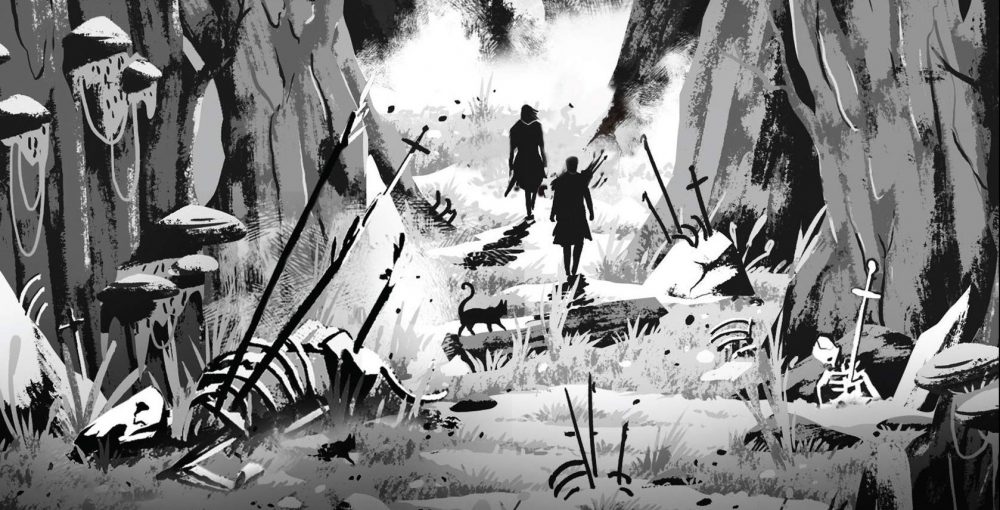 You may know the saying: no two people in the contacted world are more than six social connections apart. Inspired by Kate at Books Are My Favourite And Best, I apply this notion to books, seeking interesting ways to hop from one book to the next based on a shared author, theme, award win and so on. For Wyrd and Wonder, I’m delighted to welcome Christopher Buehlman to take the Six Degrees challenge as part of The Blacktongue Thief’s book birthday celebrations.

Christopher Buehlman (@Buehlmeister) is the winner of the 2007 Bridport Prize for Poetry and the author of novels The Suicide Motor Club, The Lesser Dead (named Best Horror Novel in 2015 by the ALA), The Necromancer’s House, Between Two Fires, Those Across the River (nominated for the World Fantasy Award), and now The Blacktongue Thief, first in a new epic fantasy series. Many know him as comedian Christophe the Insultor, Verbal Mercenary, something of a cult figure on the renaissance festival circuit. He spends half the year in St. Petersburg in his native Florida, and the rest on the road.

Supremely talented word-slinger Colson Whitehead takes us to a zombie-ravaged New York City with some of the most musical prose you’re ever going to read in a horror novel. What do we owe the dead, and whom do we trust with our survival stories? These and other interesting questions are addressed in this razor-sharp philosophical chiller. Also, this starts off our abacus of the apocalypse.

Emily St. John Mandel continues the abacus of the apocalypse with the tale of how a dread plague descends, bringing all our high-tech rushing about to a screeching halt. Casual globetrotters are stranded far from all they know and love when force majeure decrees everybody stay where you are.

Welcome to the town of Black Spring, in the picturesque Hudson Valley. Now stay for life. That’s right. Thanks to a 17th century Dutch witch, the town is cursed so that anybody who leaves after spending even one night here is driven to self-harm. Everybody stay where you are! And don’t piss off the old woman with her eyes and mouth sewn shut, even if she lingers creepily over your bed. Holy body horror, Batman.

You want body horror, you came to the right shop. Brian Evenson serves up a cult that venerates voluntary amputation. In other words, the one with the fewest remaining body parts is the boss. And don’t think the maimed have no muscle – if you cross these guys, something wicked this way limps. First of two creepy-ass cult books named Last Days.

How did we get two creepy-ass cult books named Last Days? Better ask Brian Evenson or Adam Nevill. Nevill’s LAST DAYS concerns a secretive cult that made its way from France to England to the American Southwest in the flower child years, calling up beings that so traumatized the few surviving members that they will only go near the old houses they once communed in for wild sums of money. We know this because someone starts paying them wild sums of money. Spoiler alert: It isn’t worth it. File this under Hi! This will scare you sh*tless!

Hi! This will scare you sh*tless! Full disclosure – After years of loving the movie, I only got around to reading the novel last fall. I’m happy to report that all the hype is true. Don’t say you weren’t warned. For extra thrills, get the audio version narrated by the author William Peter Blatty. Blatty was a wicked talented performer, and when he, as the demon, starts using the voice of the excitable director Burke Dennings, whom he recently murdered, it just might give you a shiver.

…and on the subject of authors who read their own audiobooks, you might want to give a listen to Buehlman’s performance as Kinch, the narrator of his epic fantasy debut THE BLACKTONGUE THIEF.

Kinch Na Shannack owes the Takers Guild a small fortune for his education as a thief, which includes (but is not limited to) lock-picking, knife-fighting, wall-scaling, fall-breaking, lie-weaving, trap-making, plus a few small magics. His debt has driven him to lie in wait by the old forest road, planning to rob the next traveler that crosses his path.

But today, Kinch Na Shannack has picked the wrong mark.

Galva is a knight, a survivor of the brutal goblin wars, and handmaiden of the goddess of death. She is searching for her queen, missing since a distant northern city fell to giants.

Unsuccessful in his robbery and lucky to escape with his life, Kinch now finds his fate entangled with Galva’s. Common enemies and uncommon dangers force thief and knight on an epic journey where goblins hunger for human flesh, krakens hunt in dark waters, and honor is a luxury few can afford.

Set in a world of goblin wars, stag-sized battle ravens, and assassins who kill with deadly tattoos, Christopher Buehlman’s The Blacktongue Thief begins a ‘dazzling’ (Robin Hobb) fantasy adventure unlike any other.

The Blacktongue Thief is out from Gollancz today (you lucky people in the US you) and on Thursday 27th May here in the UK.

Intrigued? Me too. Check out some Wyrd and Wonderful reviews of The Blacktongue Thief by fellow adventurers: Mogsy at The Bibliosanctum | Tammy at Books, Bones & Buffy | Lynn’s Books | Caitlin at Realms of My Mind

Many thanks to Christopher Buehlman for accepting the challenge and to Will O’Mullane at Orion Books for co-ordinating.