Princess Sun is the daughter of two royal lines, raised on war and politics. Bold and brilliant, she longs to lead the outmatched Chaonian forces against the Phene Empire. If her mother – ruthless, relentlessly calculating, perhaps even slightly threatened – will let her…

I’ve been looking forward to Unconquerable Sun since Aliette de Bodard first mentioned it during our SciFiMonth roundtable. A gender-swapped Alexander the Great IN SPACE is the sort of pitch I just can’t resist, a promise of sweeping space opera with intriguing world-building. Plus it’s written by Kate Elliott, whose work I’ve been meaning to read forever. So when Lauren at Head of Zeus asked if I’d be interested in a copy, I leapt at the chance (thanks Lauren!).

How do you translate giants of ancient history into space? By starting at the beginning. We join young Princess Sun fresh off the boat from her first command, a rousing victory she’s desperate for her mother Eirene to acknowledge. Chaonia’s star is rising fast thanks to Eirene’s inspired political and military leadership as Queen-Marshal; Sun wants to earn personal acclaim to cement her precarious position as Eirene’s heir.

Because Sun is also the daughter of a Gatoi Royal, the feared shock troops of the enemy Phene Empire. Eirene’s second marriage to Prince Joao was allegedly a rare case of heart (or perhaps loins, ahem) over head, and their relationship remains as tempestuous as it was unlikely. There are plenty amongst the Chaonian elite who would love to see Sun removed for a wholly Chaonian heir. The political stew is spiced with hints of past misdemeanours that may come back to haunt just about everyone, and current plots that can only collide messily.

Ironically, my sympathies were firmly with characters marked as (potential) enemies rather than with Princess Sun herself. One of the things that I find most interesting about Unconquerable Sun is how little it cares about making its heroine likeable. Sun doesn’t need you to like her, so long as you recognise her genius and respect her abilities.

If that sounds a bit bratty, well perhaps it is. Sun is assertive, arrogant, and entirely convinced of her own abilities; the only time we see hints of uncertainty are when she thinks of her beloved Companion Hetty (Chaonia – like ancient Greece – is both polygamous and queer). She only really shines (sorry, not sorry) when the action kicks in. Let off the leash, we see that Sun is every bit as good as she thinks she is, backed up a cadre of loyal Companions who have blossomed at her side.

This is unexpectedly and entertainingly underscored by them literally playing to the audience, broadcasting a carefully crafted version of their exploits to an adoring audience in what is basically Chaonia’s Got Talent. As Sun and her Companions try to evade assassins, identify who is trying to sabotage Prince Joao’s covert research programme and ultimately face off against the attacking Phene, they play to the cameras and soar up the charts. It is cheeky and wildly clever – both as a political act and as a narrative device.

It’s these unexpected garnishes that make the world-building stand out. Elliott’s Chaonia may be a small military nation hemmed in by larger, more powerful neighbours, but it’s not ancient Macedonia in space any more than its rivals are easy analogues for the Delian League or the Persian Empire. This is a possible future as well as a reinvention of the past; better, it’s a future with recognisably non-Western influences, with each star-faring nation rooted in different traditions.

Very few books have managed to hold my attention this year, so it’s no shame to Unconquerable Sun that I found myself frustrated at times by its 500+ pages – mostly during the slow opening act, which is heavy on exposition. But the supporting characters – tart-tongued Persephone Lee, determined to disappoint her family; mysterious cee-cee Tiana, whose secrets kept me guessing until the end – rapidly won me over and kept me engaged until the plot pot bubbled over (were they allies or antagonists, I wondered? I loved them regardless).

Unconquerable Sun is a book in which I find ever more to admire the longer I reflect on it. It’s expertly constructed, layered with intrigue and nuance. I loved that the Companions journey forces Sun to look past the propaganda and acknowledge the inequities of Chaonian society. I appreciated that none of the societies were monoliths, each preoccupied by different ideologies and riven with different prejudices. There’s so much seeded here that I look forward to finding out more about: the mysteries of the beacon builders, the dark secrets of the Lee family, the biotech of the Phene Empire.

If I was sometimes distracted by its historical inspirations, that’s entirely my own fault. I wanted to be able to admire how Kate Elliott has rewoven history into her new context, but I haven’t read up on Alexander the Great since I was 14. Instead, I had to settle for reading it as fictional space opera.

And on that score, Unconquerable Sun succeeds beautifully.

I received a free copy from the publisher in exchange for an honest review. Unconquerable Sun is out now in both the UK (Head of Zeus) and the US (Tor).

Want to get your hands on a copy? UK readers who sign up for SciFiMonth before the end of this week can enter our giveaway draw for the gorgeous Head of Zeus hardback.

Check out more reviews for Unconquerable Sun from other participants in the blog tour: 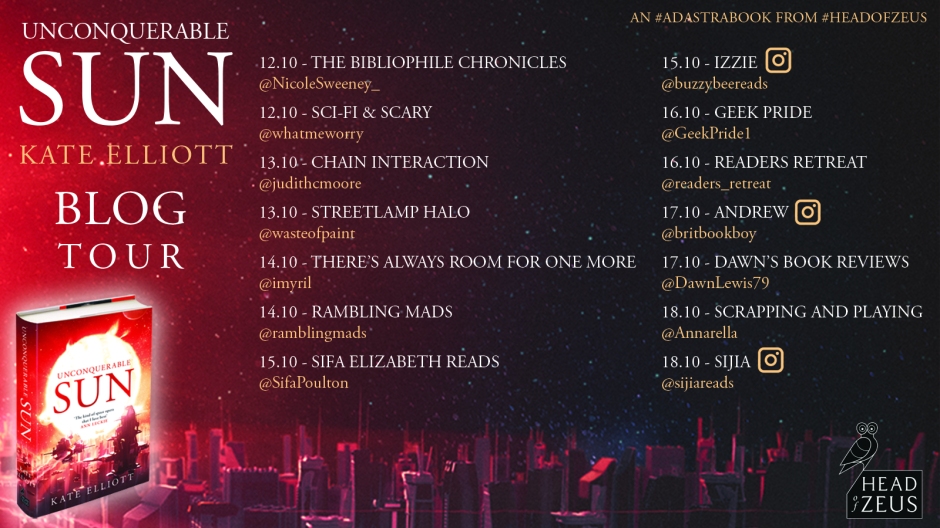