Top Ten Tuesday was created by The Broke and the Bookish, and is now hosted by That Artsy Reader Girl. It’s all about books, lists and sharing the love we have of both with our bookish friends. Today is a cover art freebie, so I’m doing a Top Ten Tuesday / Rainbow tagmash!

Happily, the Rainbow Book tag showcases great reads chosen for their gorgeous cover art illustrating the many colours of the Pride rainbows – so I’ve got ten colours to play with. I’ll be twisting the rules slightly to feature favourite recent reads chosen for the (dominant) colour of their eye-catching cover art. Thanks to Mayri the BookForager for putting me on to the tag, and to Le Book Chronicles for coming up with it! 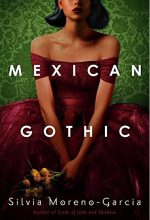 Silvia Moreno-Garcia’s 50s Gothic blockbuster has been one of my favourite reads of 2020 so far and the cover is stunning. A delightful mash-up of Gothic tropes with acerbic commentary on modern themes.

Orange: To Be Taught, If Fortunate – Becky Chambers

My second choice is very orange indeed, although I’m not a huge fan of the font. However, I thoroughly enjoyed its poignant tale of turning your back on the world for science. Space exploration and found family FTW.

Look at that resolute gaze: Arrah is a girl determined to seize her destiny and fight for her friends. Barron’s West African fantasy is a dark, action-packed epic of stolen power, treacherous relatives and shattered dreams.

Green: Sisters of the Vast Black – Lina Rather

I’m not big on religion, so NUNS IN SPACE is a pitch that could have gone either way. NUNS IN SPACE SLUGS on the other hand is a glorious (and beautiful) novella of troubled faith and dangerous secrets. 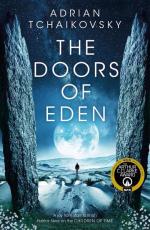 Parallel realities, first contact (or is it, if it comes from another Earth) and organic supercomputers collide in a daring conspiracy thriller. Come for Tchaikovsky’s signature imagining of alternate evolution; stay for the adorable motley cast.

I love this cover so much I went out of my way to find a copy rather than buy the re-release, so my Dominion of the Fallen novels don’t match (endless screaming). But it is as brooding as the atmospheric tale it conceals, all sharp edges glittering dangerously against the dark.

Pink: The Lights Go Out In Lychford – Paul Cornell

We’re going back a bit now, but pink is not a colour that happens very often on my bookshelf. The Lychford novellas are firm favourites: tales of magic and the supernatural in a small country town, affectionately scathing and surprisingly poignant.

Sticks and stones may break your bones, but words will never hurt you. You wish. This intelligent thriller is a satire of privacy, social control and the power of language to subvert that will kill your appetite for memes.

The latest instalment in McKenna’s folkloric modern fantasy series is atmospheric (if damp) as Dan visits the Fens with his new flame and gets persuaded by her Mum to sort out a local supernatural headache. As ever, I delighted in the mix of quotidian detail and frankly creepy paranormal allies.

A near-future thriller of climate change, space exploration and family dynamics that is acutely aware that being a feminist doesn’t stop you being an asshat. I’m still amused by the reviewer who called it ‘a book for people who get angry on Facebook and once read a Margaret Atwood book’ as if that’s a bad thing.

Tag yourself in and share a rainbow of your favourite books!