Dan Mackmain has a new home, steady work and a fragile happiness… until he’s asked to go manage the renovation of a Cotswold estate. When the Green Man makes it clear Dan must go south, he packs his bags – but why is he needed at Brightwell?

I had mixed feelings about Juliet McKenna’s The Green Man’s Heir, but the unusual combination of a modern setting with folkloric menace was enough to tempt me back for a second helping. I’m ever so glad I did: The Green Man’s Foe is a tasty serve of mystery and myth that has done quite enough to cement this series as one I’ll be reading and cheerleading for from now on. Foe builds on all the aspects of Heir that I liked best, with far fewer eye-rolls and a single coherent narrative that builds tension from creepy prelude to dramatic finale.

We rejoin Daniel Mackmain at Blithehurst, where he is Eleanor Beauchene’s man on the ground, running the estate and keeping the dryads happy. It suits him down to the ground and has freed Eleanor to pursue her academic dreams at Durham. It’s a perfect arrangement for everybody – except, apparently, the Green Man.

The day after a haunting dream of an old man’s death, Eleanor’s brother Ben asks Dan to oversee the renovation of Brightwell House in the Cotswolds. The project needs a hands-on manager who is happy to live in a spooky building site in the woods. It shouldn’t be tempting, given his current arrangements with Eleanor – but Dan recognises the house from his dreams. Thankfully, Eleanor is accommodating (sadly, she is only a voice on the phone in Foe; happily, there are new characters who made me okay about that), so Dan is quickly installed at deserted Brightwell.

Brightwell is most certainly haunted, with a dark history of unpleasant details that are slowly teased out thanks to Dan’s sleuthing and local gossip Martha Delly (sure, she’s Mrs Exposition, but I didn’t care – I’ve met and loved too many strong-minded old ladies who like having someone to talk to). It’s also perched on the edge of a wood so unkempt even a dryad’s son can get lost in it, which only gets creepier when Dan stumbles across ancient traps and a gibbet of rotting crows. Juliet McKenna does a fine job of ratcheting up the tension at every step as she delivers a pleasingly multi-stranded drama of bored teenagers, black magic and malicious water spirits.

In fact, The Green Man’s Foe reinforces my belief that The Green Man’s Heir should have been two novels to do its storylines full justice. In dedicating the whole of Foe to a single narrative, McKenna gets to gradually layer backstory and modern-day context while wringing out every drop of atmosphere. It also gives her time to develop the supporting cast. I’ve already mentioned the delightful Martha Delly, but I also enjoyed Petra’s ambitious, predatory manner and the solid mundanity of the Franklin family. The depiction of Rufus Stanlake, whose gruff exterior conceals all manner of interesting qualities, was another joy; not to mention the intriguing possibilities of Fin Wicken the ecologist.

I found myself getting on better with Dan second time around too, although his usual biases are on full display. I assume Juliet McKenna is intentionally channelling the male gaze (Dan is who he is), as we get detailed descriptions of every woman who crosses his path whereas I could tell you more about what the men wear than what they look like. Similarly, I couldn’t help but roll my eyes at Dan’s assumption that his boss’s teenage daughter would fancy him (delightfully, she barely notices he exists) vs his slow-dawning awareness that an older woman is hitting on him. I also found it odd that a dryad’s son was so judgemental about teenagers showing an interest in standing stones, but in this case, he turns out (annoyingly) to be right.

And I must admit Dan’s flaws are part of what makes him feel like a well-defined character. At the end of Heir, I wasn’t sure I would want to buy him a beer; by the end of Foe, I can imagine buying him dinner and gently teasing him about the ways in which he is absurd, because he’s a fundamentally good bloke. Dan isn’t a man who can turn his back on a person in need or walk away from a problem not of his making: his sense of responsibility is as deeply ingrained as his ridiculous convictions about his romantic prospects. This plays out in his attitude to his work as well as his missions for the Green Man, and I’m entirely on board with it.

One of the aspects of this series that I love best is the way McKenna contrasts her supernatural plots with details of Dan’s day to day life that are too important to ignore: ensuring the builders don’t run out of biscuits; agonising over whether to buy a teapot (I’m still laughing; this was perfection). Dan is nominally at Brightwell to get it fixed up – I enjoy seeing him do just that even if having a day job is really bloody inconvenient when you’re trying to sort out the local water problem (your mileage may vary; me, I’ve got ‘fantasy hero renovates old building’ on my bingo card).

Another is McKenna’s awareness of the challenges faced by rural communities. More of an aside in Heir, socioeconomic inequalities are front and centre in Foe, with council estate teenagers becoming the villain’s pawns. It’s a potential minefield, not least because their depiction is skewed by Dan’s prejudices and the vicious sneering of the builders (who bring generations of disdain to bear as only those who have lived in a closed community can). Thankfully, McKenna ensures we get enough context to evoke some sympathy, not to mention the painful subtext of people manipulated into acting against their own best interests.

It’s worth noting that the kids are afforded rather more nuance than our primary villains. This is not a series that deals in shades of grey: Dan is called by a supernatural force of nature to subdue threats to the local environment. On this occasion, there’s a human villain in the mix, but they too are beyond reason or redemption. Given my affinity for interesting villains, I’m curious to see whether Dan will be posed trickier questions in future over what the right course of action may be. While I’m enjoying the mythical mayhem, I’d be intrigued to see a little more ethical complexity creep in.

Still, The Green Man’s Foe does more than enough to transform my curiosity to commitment. Juliet McKenna is writing diverting adventures drawn from the rich well of British folklore, and I can’t wait to see what myths she brings to the page next. And I admit it – I’m curious to see whether Dan’s commitment to lonely bachelorhood will be shaken now he’s met a woman with a secret even more dangerous than his own…

In closing, a shout out to cover artist Ben Baldwin, who is going from strength to strength. The sprite on the cover of The Green Man’s Foe is supremely impish not to mention threatening (and that COLOUR). The cover art for The Green Man’s Silence is equally fab (those EYES). So much character packed into these portraits, I just love them. 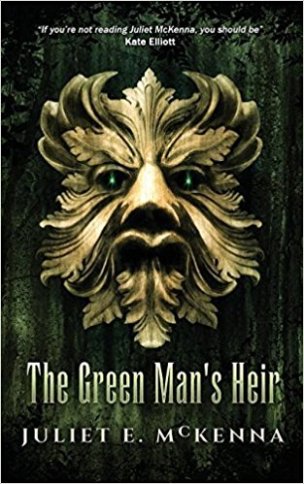 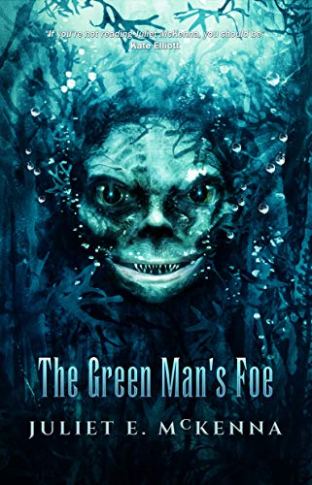 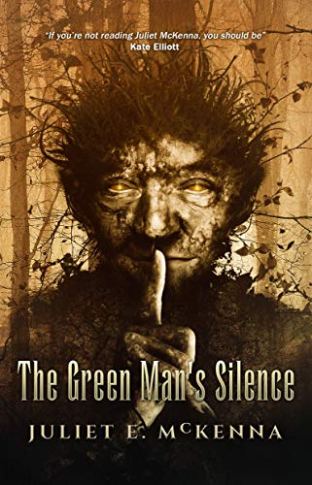