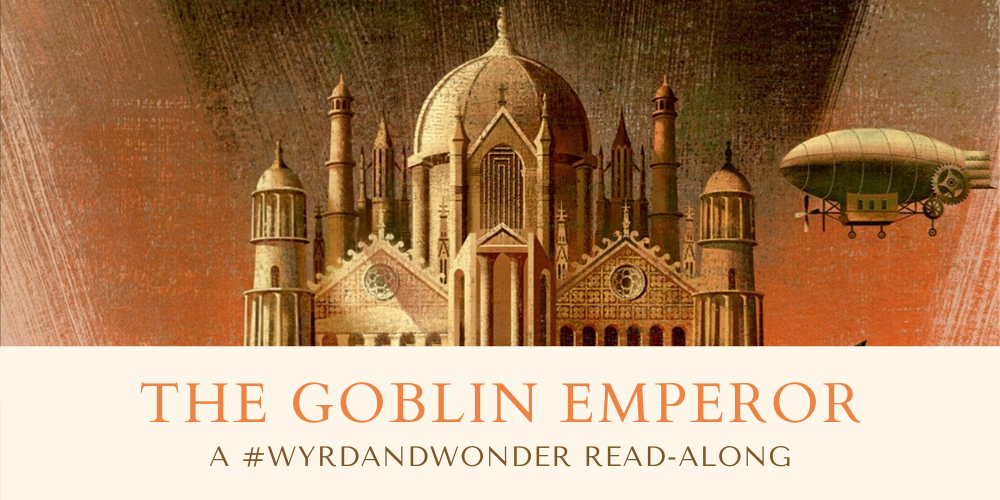 The newly-crowned emperor must bury his family and face his court. Surrounded by spite and self-interest, it sometimes seems that Maia can’t do anything right: but surely someone will appreciate his compassionate heart?

Welcome back to the Wyrd and Wonder Read-along! For all my struggles to settle down to read these days, I find I can sink into The Goblin Emperor like a stone. Lisa of Dear Geek Place is our host for this read-along, so, let’s take a look at the questions she posed this week… (‘ware spoilers)

So many verbal encounters. Princess Sheveän seemed outraged at the idea of the late emperor’s body being ‘desecrated’. Do you buy that as her reasoning? Or do you think she was making a scene for another reason?

It’s funny, in my head she was outraged at the desecration of her husband’s body, which sort of almost made sense except for the fact there was no desecration. Chill, lady, an ordained religious fella opened the casket and prayed. Under supervision. Sure, somebody saw the sad mess the incendiary device made of people you loved (did you though? Did you? Or did you love the influence being their wife and daughter-in-law gave you?) and the funeral was a leetle delayed, but… desecrated? It sounds a lot like shit-stirring to me.

I could make a case for her being an emotional mess and acting out under the influence of her grief. But her responses seem a little too theatrical. She feels like an ambitious person who senses their chance slipping away from them. I think she makes a far stronger suspect than Chavar, although she’d be an unlikely member (or benefactor) of the Worker’s League of Cetho.

Cala and Vedero both have some hard but pragmatic advice for Maia. How do you feel about these scenes, and the conversations between them? Are they being too harsh and/or cynical, or is Maia simply being too naive?

Perhaps he is naive, but above all else he is kind. And I dearly want him shown an equal measure of kindness in turn. So I am grateful to Ambassador Gormened and to Witness Beshenar and – always – to Csevet, for his low-key but ferocious protection and support. He’s like a faithful terrier, always willing too leap in front of Maia (verbally at least) to keep him from harm.

Oh, Maia. He just needs a hug, okay? On a regular basis. A smile and a kind word of reassurance. I had several little sniffles this week (pretty much every time someone was nice to him; he wobbled, and I wobbled with him). It seems a terrible position to be in, to find your notionally limitless power corralled by tradition and protocol, and your compassion blunted by a relentless need to sacrifice the well-being of others to preserve yourself.

But I also think Vedero in particular is cynical – and for me that reflects poorly on elvish society and on the late emperor. He didn’t think twice about spending the lives of others as coin, and he had no interest in their aspirations or preferences. Here’s hoping that Maia’s warm heart can bring some much-needed change to court.

Do you think that Setheris’s days of troubling Maia are over?

I think I’ll plead the reread on this question, even if it means I don’t get to hiss asshat this week. Much.

A discovery is made that the sabotage of the Wisdom of Choharo may have been caused by the Cetho Workers League – a “dissident group”. Did the plot just thicken?

I’m loving how much I don’t remember from my first read of this book. I get the joy of hanging out with beloved characters and the thrill of not being sure all the twists the plot has in store.

However, I think what intrigues me with this thread is the teasing out of the social tensions within the empire. We’ve been explicitly exposed to the tensions within the nobility – the horse-trading of marriage to cement alliances, the layers of rank and influence. Now we’re learning that there are other forces at play. A Workers’ League? Sounds a lot like a union. So we have a steampunk fantasy world of elves and goblins with emerging socialism? Bring it.

See also: Maia’s moment of illumination over the question of bridging the Istandaärtha – a bridge that could be transformative to society and economy and that is so unsettling to champions of the status quo like Chavar he has conniptions at its mere mention. Yes, let the emperor talk to your elvish engineers!

I also loved the glimpse of goblin society – the pages, so young and casual and excitable; the wink from the guard, Gormened’s comments about the nesecho – they’re… well, they’re an awful lot easier to like than the elves, aren’t they? I’m looking forward to meeting the Great Avar.

But wait, this is a read-along – what did the rest of the party have to say?

* Links will be added when published!