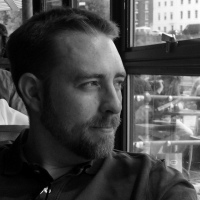 Patrick Edwards is a Bristol-based author of speculative fiction. I leapt at the opportunity to ask him a few questions (spoiler-free) to celebrate the release of his new novel Echo Cycle – and what a charming bloke he is!

In Echo Cycle, You stir together a dystopian vision of a post-Brexit future with a Roman time travel drama: what drew you to these periods – and what inspired you to mix them together?

To answer that backwards, it started with Rome. I’ve loved its history since childhood (starting with Asterix, delving into more robust sources later) and I’m a repeat visitor – it’s my favourite city and I’d happily live there. In Rome you’re swamped by the past, able to touch it and taste it and smell it – the flagstones in the forum are dated to Julius Caesar’s time and the thought of treading where he did gives me chills.

This leads me to the second part: Brexit. I love Rome and Rome is in Europe; I’m Britain-born but my early education – in fact my formative childhood – was in France. I was angry and confused and not a little afraid of this thing being taken from me, so I did the only useful thing I could think of: write about it.

How do you approach a new project? Do you work things out based on an idea for a plot or are you drawn to explore particular characters and settings? How about developing the ideas – is it plotting or pantsing?

Oh, how wonderful it would be if the whole idea just landed in my brain; the saved hours of wrangling and doubting and revising! What I tend to do is find items in the news or in history (bless you, Wikipedia) that are quirky and memorable, then build around them: my first book, Ruin’s Wake, was inspired by the stories of South Koreans floating mobile phones attached to party balloons over the DMZ in the hopes someone would find them and connect with a wider world.

If that fails, there’s always good ol’ wish fulfilment: the idea of taking everything you know as a modern person and being dropped in the past is enticing beyond belief – hence Echo Cycle.

Both Echo Cycle and Ruin’s Wake begin with bleak visions but focus on more hopeful possibilities in their futures. Do you consider yourself optimistic or pessimistic about the future?

I was more optimistic three years ago, for sure! Despite it all, I still cleave to the idea that things will get better for two reasons: the first is what I see as my professional obligation to offer readers a light at the end of the tunnel (the news doesn’t need any help in selling depression) and the second is my job as a dad. I want my kids to look forwards and dream big, so no matter how repeated and large the shocks it remains my responsibility to think of better times ahead

What first drew you to writing speculative fiction? (Why do you love fiction / genre, specific influences etc)

I am a fully paid-up nerd. I had the Klingon language tapes, the lightsaber, the addiction to watching Picard and co. every week (Riker, HR’s worst nightmare, is my favourite). At boarding school I had a shelf full of Star Wars tie-in novels.

Though those were my first loves, it was more about the intrinsic transportive effect of all books – no matter how lonely or sad you are you can lose yourself in one and everything just seems better, a real help when you’re half a world from your family at boarding school. The older I got, the less genre seemed to matter until I started encountering writers like Mitchell and Harkaway that do away with it altogether. I’ve come to see it as a kind of atheism-equivalent: where the hard genres duke it out for who’s better, more worthy, more fun, speculative fiction throws out the rulebook and tells the stories it wants without regard for rules of form. In that sense, it’s not a genre at all, it’s Saruman of the many colours and none – and we’re back in nerd country.

You have written two stand-alone novels so far – would you ever be tempted to revisit these worlds?

Not immediately – I have a fresh idea burning away at me, to my editor’s chagrin! Someone did point out that there are four seasons in the world of Ruin’s Wake – which was left pretty open-ended – so who knows if there’s a Ruin’s Bask or Ruin’s Death out there in the fringes of my brain?

What can we expect next from you?

Something very other-worldly, he said, being coy.

imyril: I’m interpreting this as faeries or space opera and I’m excited either way!

What SFF books are you looking forward to the most in 2020?

I’m rubbish at planning my reading ahead, but I understand David Mitchell has one in the pipeline. Also, there’s all the Rivers of London stuff from Ben Aaronovitch that I always snap up on the spot – the graphic novels are a particular delight.

Echo Cycle is a timeslip political thriller set in a dystopian near-future.

After 30 years of self-imposed isolation in its Brexit bubble, Britain is tentatively re-engaging with a European Confederacy risen phoenix-like from the ashes of the crumbled EU. But when the British delegation comes under attack, it becomes impossible to tell whether it’s a false flag by a British faction determined to remain independent or a vengeance 2000 years in the making…

Many thanks to Titan Books and Patrick Edwards for the early review copy and the chance to have a chat!