Annemieke is on a roll this year! First she created an epic genre reading challenge and for SciFiMonth she has created the SF TV Shows Book Tag. I’ve only seen two of these shows, but I’ve read a lot of books… I can do this, right? Let’s find out…

Be a good book tag citizen: credit Annemieke @ A Dance with Books as the tag creator and tag/tweet her a link so she can swing by to say hi ( you may use her original break graphics if you wish). Thank the person who tagged you, answer the questions and tag as many (or as few) people as you like.

Thanks to Annemieke for tagging me to take part!

Stargate SG-1: A Book with Wormholes

Wormholes are a big feature of classic SF: Dune and Contact both use them for interstellar travel, although it’s such a long time I read them my memory of how it works is very hazy! For a modern take, I reckon the ring gates in The Expanse count – they let you jump from one part of the universe to another (just don’t do it too often too fast. You don’t want to attract the wrong sort of attention…). So I’m going with Cibola Burn – simultaneously my least favourite novel of The Expanse, and the one I suspect it’s most important I reread. Dammit.

There are some amazing space opera retellings – I’m really excited to read Kate Elliot’s gender-swapped space opera take on the life of Alexander the Great next year – but, um, I haven’t read them.

So that leaves me with the Gap series by Stephen Donaldson, a deeply unpleasant space opera take on Wagner’s Ring Cycle. I read The Real Story (the first volume) in my late teens: it got me at just the right age to be taken by antiheroes and to accept the shit male authors fling at female characters. Yes, it’s wall to wall rape and psychological abuse – while I still have a copy, I can’t imagine it’s going to stand up well to a reread. I persevered to end of the saga, which continues degrading its characters (although at least there’s less rape), and goes on, and on, and on (ironically, this might stand up better to a reread. Adult Me enjoys very different things to Teen Me).

Stargate Universe: A Book With Characters Taken A Long Way From Home

I’ve been reading The Sparrow by Mary Doria Russell all month and it certainly fits the bill for this prompt! The Society of Jesus send a mission to make first contact with an alien race whose gorgeous choral song is picked up by SETI. We’re told from the start that it goes horribly wrong – the question is why… it’s brilliantly told and a heck of an emotional rollercoaster. If you can hear sobbing in the wind, it’s because I’m reading the final act today. 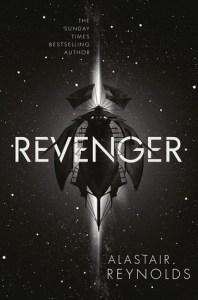 I’m torn between favourites here, but I’m choosing Revenger by Alastair Reynolds. Sisters run away from home to find adventure in space, joining a buccaneering crew of tomb raiders who visit ‘baubles’ (planets that an ancient race designed to lock down – no getting in or out except in excitingly narrow slices of time) to liberate treasure. If that’s not enough, the elder sister is promptly kidnapped by the most feared space pirate in the galaxy and the other must find a way to rescue her. Dark, bold, and highly entertaining (nominally YA) space opera.

I’ve got a lifelong soft spot for Polar City Blues by Katharine Kerr, so I’m taking this as an excuse to bang the drum for it. Humanity occupies a tiny bit of space, an uncomfortable buffer between neighbouring alien empires the Confederation and the Alliance. When a Fed is found dead in Polar City, it could be the spark that burns the house down – Polar City Blues is a crime thriller with five alien races, psychics and emergent AI – as well as a fast, fun read.

Fringe: A Book that Uses the Term or Has Pseudo-Science

Fallen Skies: A Book with an Alien Invasion

This is a staple trope of classic SF, and the topic of two of my favourite John Wyndham books. But more recently, it was the focus of Cixin Liu’s Hugo Award-winner The Three-Body Problem. I found this indigestibly dry, but your mileage may vary – it’s definitely an unusual book and I was happy to see it gain international recognition.

The 100: A Book in Which a Group Tries to Survive Against All Odds

I feel like this prompt is begging for something post-apocalyptic, but I’m choosing Semiosis by Sue Burke, which I don’t see enough people talking about. A high-minded group of pacifists go in search of a new world, but when their craft malfunctions, they settle a planet where they don’t recognise the threat because it’s so far outside their experience. The narrative follows subsequent generations as they struggle with poisonous plants, each other (utopias, eh), and another alien race.

12 Monkeys: A Book with Time Travel

I’ve never reviewed The Psychology of Time Travel by Kate Mascarenhas, because I was ferociously overwhelmed when I read it – but we awarded it the Subjective Chaos Kind of Award for Best Blurred Boundaries this year and you know we have the most excellent taste. Psychology is by turns a locked-room murder mystery, an alternative history and a love story, as well as being an examination of how power corrupts and a reflection on the many ways that being a time traveler could seriously screw up your mental health. Yes, there’s a lot going on in this elegant little package.

Battlestar Galactica: A Book Where Humans Own Creation Turns Against Them 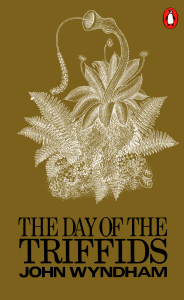 I skipped Wyndham earlier to talk about Cixin Liu, so let’s hear it for classic apocalypse The Day of the Triffids in which not one but TWO of our scientific endeavours combine to practically wipe us out. I was challenged recently on how I can love Triffids when I rage about gender roles in classic SF, but it’s easy: there are multiple female characters, who are clever, capable and at times bad-ass. While there’s a case made that ‘a woman’s duty is to bear babies’ there are also viable alternatives on offer. It remains dated, but it’s bearable. That said, TW: ableism

The 4400: A Book with Alien Abduction 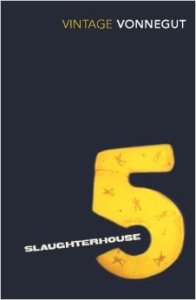 …gosh, this one is tricky. I feel I may be missing some tricks (I mean, does the Quelin arresting Corbin count in The Long Way To A Small Angry Planet?) but I’m playing it safe with another classic: Slaughterhouse-Five by Kurt Vonnegut. Optometrist Billy Pilgrim is convinced he was abducted by aliens from Tralfamadore during WWII, but is it just a coping mechanism for his PTSD? This was an interesting read, if rather surreal.

Extant: A Book with an Android/Robot/Cyborg as a main character

In a shock move, I’m going to pass over Murderbot (because I’ve got this far without duplicating Annemieke’s choices, so why stop now?) Time for a book I haven’t read yet, but really want to: I was devastated by Martin L Shoemaker’s short story Today, I Am Paul, in which an android provides care to an old woman with dementia. Shoemaker has expanded this into the novel Today, I Am Carey, and when I’m feeling emotionally robust I look forward to being devastated all over again.

…I’m also looking forward to Naomi Kritzer’s Catfishing on Catnet, her YA novelisation of the further adventures of the AI from Cat Pictures, Please.

Phew, I made it! I may have had to lean hard on books that have been on my shelf for years, but it’s been fun.

I tag Tammy, Maddalena, Mogsy and The Captain (no obligation folks, but I had fun so I thought I’d share the love) – but if you fancy having a go, tag yourself in and let me know so I can swing by to read your answers!