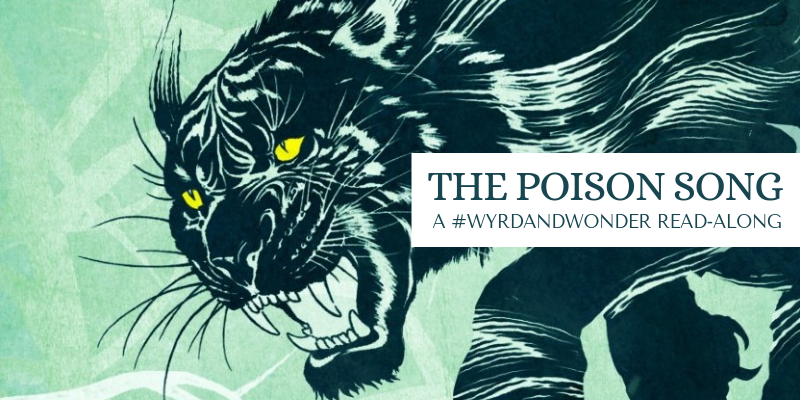 Our heroes are separated, Hest has a Grand Plan (#HestNO), Tyranny has the upper hand, and Noon has attracted the attention of an ancient force whose intentions are entirely ambiguous. We’re only a week in and the screaming is intensifying.

Okay folks, you know the drill: all the spoilers, all the way down – but only through Chapter Nineteen. The Poison Song has got off to a hell of a start. If you could hear distant wailing on the wind, that was probably me (and I wasn’t even in the country; just wait till I get to this week’s chapters).

Noon meets ‘She Who Laughs’, after a rather unexpected departure in the middle of a battle… What’s your take on this strange ‘goddess’ and the lore drop she brings with her, and what do you think this meeting will lead to? Do you have any thoughts/suspicions about the significance of what happened in Noon’s past?

Before we talk about She Who Laughs, can we just take a moment to get past the end of Chapter Ten? I genuinely thought Jen Williams had up-ended the playing board and killed Noon off… thankfully not, and instead we get to meet the mysterious spirit of fire who brought the Aborans to Sarn!

I am absolutely agog over her fascination with Noon’s memories. From Mother Fast’s responses in The Ninth Rain, there seems no reason to doubt that Noon killed her mother, so I’m assuming the reason it matters is that suppressing the memory is somehow restricting Noon’s powers. Is there some trick or knack she has lost access to?

I’m also not sure I trust She Who Laughs. She seems all power and no responsibility. She carried the Aborans around while it suited her, then abandoned them to die when she got bored (and sure, they’re arrogant asshats, but her actions still seem fairly arbitrary). The fell-witches are apparently her chosen, but she doesn’t look out for them – effectively abandoning them to the Winnowry and the Jure’lia (…so what was the point in choosing them?).

And now SWL keeps telling Noon how special and insightful Noon is, but she’s clearly holding secrets from her. I can’t tell whether she already knows what happened to Noon as a child and is forcing her to face it, or whether she only knows that it was important and needs Noon to dredge up some critical detail. Either way: why does she need it? And why now, eh? Eh?

I take it back: I am sure. I don’t trust She Who Laughs. At all.

Last week was full of entertaining wild guesses, and I’ve got one more: She Who Laughs is the one being on Sarn who we know is capable of interplanetary travel. So, uh, can she piss off and give the Jure’lia a lift?

This isn’t so much a question, as just a chance to check in with him, but: what are your thoughts and feelings on Tor’s reaction to Noon’s disappearance? Clearly our boy is not taking it well…

Oh, Tor. He just can’t help himself can he? He’s had a series of hard knocks: feeling responsible for the end of the world, being stripped of his illusions about his superior heritage, and now seemingly losing the love of his life (however difficult that may be for him to accept). He has always tended to self-destructive depression, and now the two women who might save him from himself are both too far away to help him shake it off.

On the other hand, I loved Aldasair’s unexpected dose of tough love. Our sweet summer child has grown so much. His love makes him fierce and his sense of responsibility makes him desperate – and who would’ve thought he would be the fierce, responsible one back when we first met him? He’s taking no nonsense from his wayward cousin. I was just disappointed that it didn’t really dent Tor’s self-pity at all.

However, all is not lost. There was a conscience in there to be pricked and an intelligence that cannot be drowned in a case of Vintage’s best wine. Tor may have just figured out the Jure’lia’s best kept secret in spite of himself… so I’m proud of my bruised, grieving boy. Go get ’em on your flying tiger.

Onward to Tygrish, where Vintage and Chenlo … do not precisely receive a warm welcome. What do you make of the situation here under the rule of Queen Tyranny (and Queen Windfall!)? Is this royal partnership going to last, do you think?

WHO COULD HAVE GUESSED VINTAGE WOULD BE A TERRIBLE DIPLOMAT?

Well that went about as badly as we thought it might, didn’t it?

Tygrish seems surprisingly content under its new rulers, and I suspect Vintage’s belated reappraisal of the situation isn’t far from the truth: why make a fuss about hereditary rulers who haven’t done much for you lately? Tyranny and Windfall make an impressive (and terrifying) pair, and their alliance initially looks more than strong enough to outlast threats and talk of duty.

…but Windfall summoning Vintage to a private audience gives me a little spark of hope that there’s opportunity here in spite of the bat’s insistence that Ebora means nothing to her. She reminds me in some ways of Celaphon: proud, isolated, and on some level craving a bond. Ebora holds no temptation for her, but perhaps Helcate may?

My money is still on Hest and her Behemoths being the only thing that can soften up Tyranny, though.

This is a casual read-along – we’re reading companionably to an outline schedule and some of us are blogging as we go.

Want to join us? You’re very welcome – just grab the book and weigh in with your thoughts in the comments, on Twitter or on Goodreads. Weekly blogging is entirely optional.

Casual is the name of the game, but we’ll broadly follow our schedule. Consider this a guide to the earliest date you can start discussing weekly prompts – it’s fine to post later (but if you read ahead – no spoilers please!):

Prompts typically posted on the Goodreads group midweek (if they’re not up by Friday, kick me). If anyone else fancies taking the questions one week, I’m happy to share.