Marian put Robin of Locksley behind her years ago when he deserted her for the Church. Now the Merry Men are dying and Friar Tuck is convinced only Marian’s Craft can solve the mystery. The estranged pair must join forces to avenge their friends, but Robin’s fervent beliefs are as poisonous as his long-kept secrets…

Re-tellings and re-examinations are all the rage, and if I’m honest I don’t love them as much as I think I do. Consequently, I now let a lot pass me by. But offer me the right story – or the right characters – and I’m there in a heartbeat. Brightfall leapt out at me because I love the idea of a middle-aged Marian and reluctant Robin having adventures in Sherwood Forest. I’m not sure I processed much more than that core promise: so imagine my surprise – and delight – to discover just how magical a makeover Brightfall turned out to be.

In the middle of the greenwood stood an oak, broad as it was tall, with roots the Fae believed wrapped around the heart of the world.

Yes, Brightfall is a tale of Faerie as well as of Sherwood. Marian is a common-born witch who draws power from moonlight and consorts with dragons. Her Fae allies are steeped in glamour and treachery, calling to the unwary to dance in their rings. Sherwood is a forest as full of supernatural threats as it is outlaws, but it is a haven for Marian and her two children.

Robin, on the other hand, fled the greenwood twelve years ago for the safety of an abbey, haunted by sins he wouldn’t name. His abbot – none other than Friar Tuck – is belatedly determined to make him face his past, pushing him back into the world to be Marian’s protector as she tries to solve the mystery of the Merry Men’s murders. The stage is set for a bickering road trip where faith and sin clash with magic as the couple’s past comes back to the haunt them.

Jaime Lee Moyer folds in familiar characters as she sets up her tale. We meet Tuck and Little John; Marian mourns Will Scarlet (whose death instigates her quest); there’s a sly nod to Alan-a-Dale’s role in making Robin more a myth than a man. This is a story that takes a flamboyant myth and allows at least a grain of truth to it.

Yet Moyer also works hard to ground her legends in reality. Her Nottingham is a town of merchants quick to try and take advantage of a woman travelling alone; John is defined more by his love for wife and children than his past as a Sherwood outlaw; Tuck – like Robin – is trying to make up for errors in judgement. There’s little of the legend about Robin himself. Here he is utterly unlikeable: arrogant, self-absorbed, small-minded, and notably resistant to facing the sins he claims he wants to be absolved of (and this is perhaps his worst sin to me: he seems to think redemption is a thing that will just happen because he has regret, or at best something he can earn through prayer alone).

In glittering contrast, we get the Fae. Moyer’s Fae put me in mind of Brian Froud’s fabulous illustrations; the shimmering beauty of the nobility contrasting with the gleaming eyes and sharp claws of the lesser Fae. There’s a genuine air of threat about the Court: for all Marian’s Craft, she can’t light a candle to the effortless magicks of the Lady’s nobles – and they know it. It’s a tricksy business, dealing with the Fae, and Moyer imbues her tale with appropriate unease. I’m choosy about my Fae, but this depiction ticks prety much all my boxes.

Yet while you might expect me to rave about its magical trappings, I found the book at its best when it focused on the commonplace: the down to earth details of parenting, contrasting sibling bonds, tensions between estranged lovers, the twin arrows of guilt and grief. And for me, the two sides of the narrative didn’t quite gel. In the end, I would have liked either rather more of the Court or considerably less of the Fae full stop (the Trickster, in particular, is a brilliant character but so powerful I was left wondering why Marian’s quest was required at all). I preferred Marian’s exhausting, bounded hedgewitchery to the Trickster’s near-unlimited ability to drain the threat from a situation with a glamour or a wave of the hand.

The threads of romance – love abandoned, love lost, love planting its first seeds – are handled well, interwoven with themes of responsibility and redemption (along with regular outrage at Robin bloody Hood). But for me it skims a little too lightly, never quite peeling back the layers implied by the narrative.

But this is Marian’s story, first and foremost – and with her tale, at least, I was well satisfied.

I received a free copy from the publisher in exchange for an honest review. Brightfall is out today (Sep 5th) in the UK. 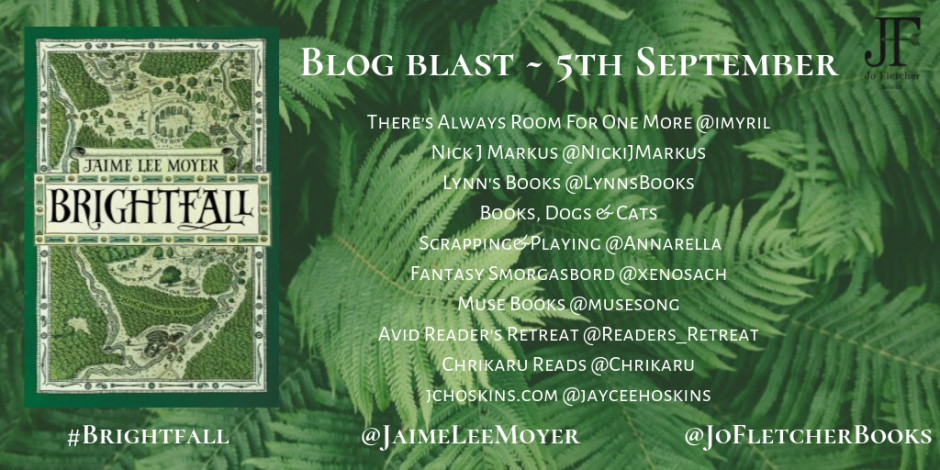