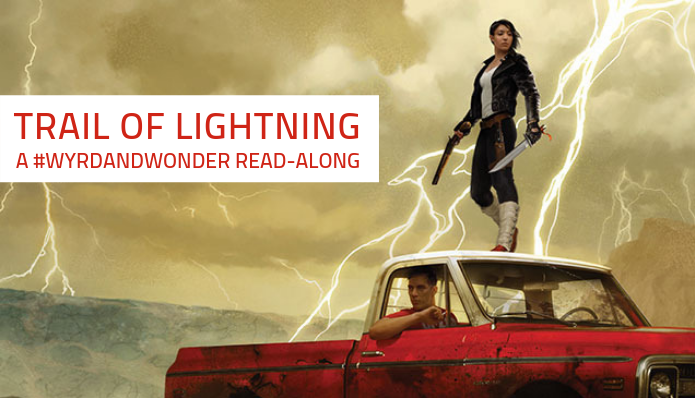 Lightning doesn’t strike out of a clear sky… unless the gods are abroad. And in the Sixth World, that’s entirely possible – especially if you’re Maggie Hoskins.

24 hours isn’t long to forge a partnership, but it’s been eventful! Do you think Maggie and Kai make a good team? Why?

…in spite of myself, I do. Let me qualify that: I think they’ve got complementary skills (lock picking vs lock kicking, I like it) and personalities, so they could make a good team. I’m less certain whether they will, because those personalities don’t always rub along well together!

Besides, Maggie really doesn’t want a new partner and she doesn’t respond well to being in close quarters with another person. She’s stand-offish, she’s grumpy and she tends to react to surprises with the threat of extreme violence.

Thankfully, Kai seems very open-minded and forgiving – perhaps because he’s got some Sekrit Skill that helps him take the rough edges off people (although he hasn’t tried it on Maggie so far). Or maybe he really is just naturally charming. I don’t think so though. I’m not really clear why he wants to team up with Maggie, either, which makes me suspicious. If he was hoping to meet some semi-divine beings though, he’s in luck…

A Trickster comes to tea! We meet our first Bik’e’áyée’ii – what do you make of Ma’ii? …and his mission?

O HAI COYOTE. Look, I shouldn’t love the Trickster, but I do. I like the way Rebecca Roanhorse depicts him here: self-assured, petty, given to barbed comments and sly mockery, manipulative but not particularly subtle. I also like that Maggie is completely unphased by him – pushing his boundaries, calling him out.

However, I think it’s a terrible idea to catch him the breath of life. He’s Coyote, so I don’t trust him an inch  – whatever he wants it for is surely only going to benefit Ma’ii.

…on the other hand ohmigods Roanhorse has apparently – almost effortlessly, given how few pages in we really are, although it’s felt like quite a harrowing ride already – sold me on the idea that the breath of Níłch’i is a Thing. This is a world I want to hear more about.

Oh, Maggie. I have Thoughts, and I wish I hadn’t waited to write them up. I’m pretty mad at her backstory: our hard-boiled heroine is shaped by tragedy, a fantasy protagonist driven by the horrific loss of her loved ones. It’s a tired old trope that makes me grumpy. One of my favourite things about the Incryptids (yes, I know, different tone) is that while they face death daily, the Price family are a tight-knit bunch who are very much alive and supporting one another.

No such luck for Maggie: not only was the woman who raised her murdered in front of her, I’m really convinced Neizghani adopting her did her any favours. I’m deeply mistrustful of a man who helped – even encouraged – her to develop her powers, only to abandon her when they seemed to be getting the better of her. Right now my words for Neizghani include irresponsible and manipulative (well, that might be a Bik’e’áyée’ii trait I guess).

…on the other hand, the way he left and the words he used don’t quite match up with Maggie’s harsh judgement of herself. I didn’t take from his parting words that he was writing her off – or that she’s irredeemable, doomed to become a monster in time. So while I’m unimpressed that he left her to wrestle with her clan powers alone, I’m feeling better now the idea of evil being contagious isn’t being portrayed an inevitable progression. It’s a possibility, not a given. You can heal from trauma (I was really worried by week one, okay?)

Any predictions or other observations at the half-way stage?

If Tah isn’t okay – and especially if that’s used to spur Maggie on (or push Maggie and Kai together) I may throw the book through the window. In spite of Coyote and Níłch’i, it’s on thin ice right now.

I’m reading Trail of Lightning as part of the Wyrd and Wonder Read-along. See what my fellow readers had to say this week:

Fancy joining in? Don’t worry, I’m playing catch up too – and this isn’t a long book, so you’ve plenty of time to dive in. Already read it? Feel free to join in in the comments on our blogs or on Twitter – but please, no spoilers.

See you next week!