Okay, we’re a couple of months into the year and I start a new job tomorrow (eek), so it seems like a good time to take stock, break out an image editing tool, and see how my dance card is looking for Dancing with Fantasy and Sci-Fi!

No, I’m not procrastinating about anything in particular, why do you ask?

So, the key thing to remember about this challenge is that just because I’ve allocated a read to a prompt for now doesn’t mean I can’t move it to another prompt later! This is good, as it means I don’t have to spend hours agonising over whether I’ve picked the right prompt for each book, strategically speaking. Although I may have spent hours agonising anyway. Old habits die hard.

Wait, what are you on about?

Dancing with Fantasy and Sci-Fi is a prompt challenge designed by Annemieke at A Dance With Books. Over the course of 2019, you can try to read books to tick off 20, 30 or 50 prompts (depending on how many parts of the challenge you decide to tackle). You can only use any given book once – even if it matches multiple prompts, you have to pick one! – but you can shuffle them around if it helps fill in your dance card later (phew). If you get completely stuck, you are allowed one double-up per category (so three in total across the year) – where you can use one book to tick off 2 prompts.

Well, as of today I’ve read 11 books this year, so in theory I’m 20% of the way there (as I’m starting out with the ambition of doing the full 50-prompt challenge). However, that’s assuming that every book can be matched to a prompt… 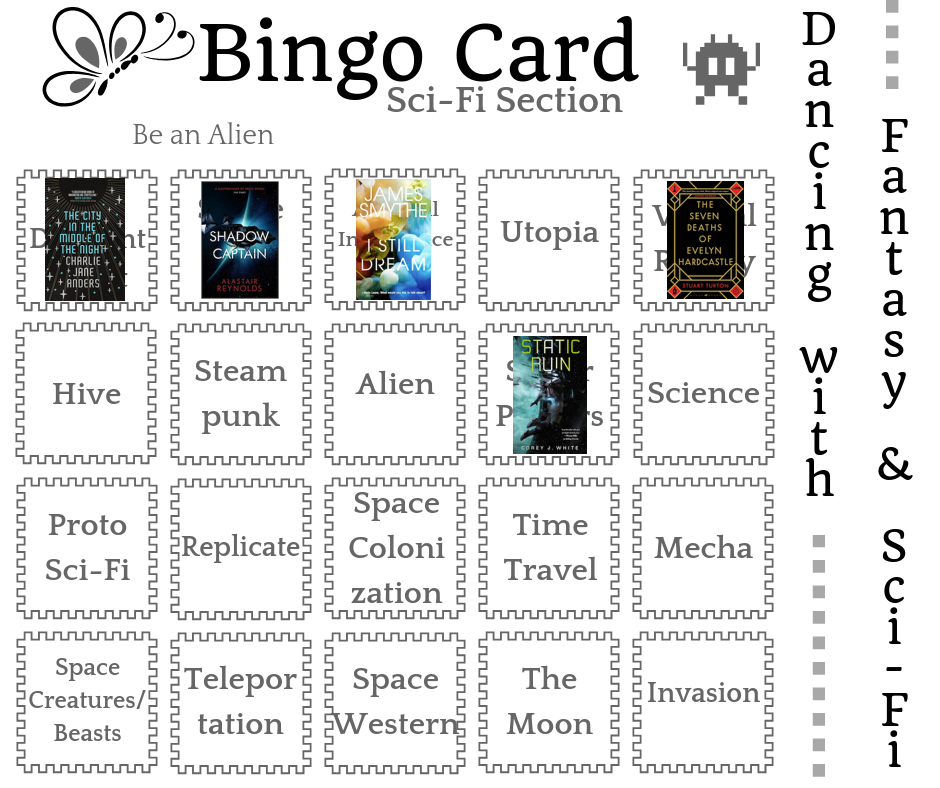 Prompts completed: On a Different Planet (The City in the Middle of the Night) | Spaceship (Shadow Captain) | A.I. Point of View (I Still Dream) | Virtual Reality (The Seven Deaths of Evelyn Hardcastle) | Super powers (Static Ruin)

Prompts completed: Novella (The Tea Master and the Detective)

Not bad, overall. I’ve only allocated 10 of my 11 reads (I mean, I suppose I could put my reread of The City of Brass against THIEF in fantasy, but I’ll wait and see what else comes along), and I’ve already moved one read from where I provisionally assigned it (I didn’t realise I Still Dream had an AI POV until I read it – I had The Tea Master and the Detective in for AI). But it seems like a good start. However, my current reads don’t easily place against any prompts so… there’s a lot of reading left to go until year’s end! I’ll check back on my progress in a couple of months time.

Tempted to take part? It’s not too late – just sign up on Annemieke’s blog and begin assigning your reads to prompts! Need some ideas? I’ve made some recommendations for the first half of the sci-fi and fantasy prompts – more to follow soon!