I know, I know, I said I’d write this 2 weeks ago. Better late than never, right? So: what did we get up to in Australia? This trip was the Australian tourist indulgence we never usually allow ourselves: a chance to fit in as many of the places most people go to Australia to see as we could.

We started out in Sydney, but this trip wasn’t about seeing cities. We do that when we visit family. So we picked up our truck and got treated to a night of Italian fine dining on the Spit before we headed out on our odyssey: over 6000km meandering from East cost to West by way of the Great Ocean Road, Kangaroo Island, Uluru and the Red Centre.

Our first leg was an easy 900km day down to Melbourne to visit old friends for the weekend. Or so we thought. The day before, torrential rain flooded the highway; thankfully, the waters dropped overnight and we cleared the area just before the next storm hit. Literally – it caught us on the edge of Melbourne. 20 minutes and 4cm of rain later, we considered swimming the rest of the way.

Even if the weather had dampened our enthusiasm (it hadn’t), a weekend of barbecues and beer was guaranteed to get us in the mood for the holiday. In case that wasn’t quite enough, our friends took us on a walk around what is surely Melbourne’s most enthusiastically-decorated street.

Now, I’m not big on Christmas lights. Flashing lights (especially blue LEDs) at best give me a headache, and at worst trigger a migraine. So Santander Crescent is a special kind of hell as far as I’m concerned, but it’s also jaw-droppingly impressive in a WTAF sort of way. Their commitment extends to sponsorship (ironically, not from Santander), music, and live performances – for weeks. I’d love to know whether estate agents warn prospective buyers in advance. I wonder what the neighbours do if you don’t want to join in?

Fleeing south on Monday, we left the bright lights of the big city behind and set off for the Great Ocean Road under cool grey skies.

Time for an unpopular opinion (not least because taking the long way round along the Great Ocean Road was my idea): I, uh, don’t think the Twelve Apostles were worth the effort (full disclosure: 12-year-old me thought Niagara Falls was disappointing too. I have form for this sort of shit).

Don’t get me wrong: the Apostles are great sea stacks. I imagine they’re very pretty on a quiet, sunny day. We found them under heavy cloud, swarmed by a bizillion tourist buses, and if there’s one thing I really don’t enjoy it’s being surrounded by hordes with selfie sticks. More power to them: we got out of their way. 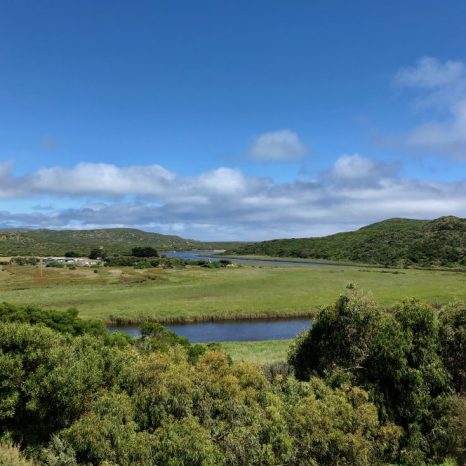 Thankfully, all of the Great Ocean Road is spectacularly pretty (and it’s much quieter once you get west of the Apostles): sandy beaches, crumbling cliffs, rolling hills, and a hinterland so green you could be in Dorset. There’s also no shortage of interesting geological formations, and the others were luxuriously unvisited – half a dozen of us admiring the views, rather than a few hundred.

Holes in the ground

We overnighted at Mount Gambier, mostly famous for its holes in the ground (…this turned out to be a recurring theme for the trip. Who knew?). Mount Gambier rises abruptly out of the South Australian plain: a dormant volcano masquerading as a lonely, wooded hill.

I think of Australia as being ancient, geologically speaking; softened by eras of submersion, uplift crinkles worn flat by millennia of erosion, but Mount Gambier is a reminder not to generalise. It’s also really pretty in summer: the volcanic craters on the hill are now lakes, and we got to see the Blue Lake in its vibrant cobalt summer glory (I couldn’t do it justice with my camera, but here’s a link – it really is that blue, and we don’t really know why it happens).

Mount Gambier is also home to a series of sinkholes, several beautifully converted into shady gardens. We ventured down into the cool serenity of Umpherston’s sunken garden and came face to face with its resident gatekeeper: a very friendly possum.

The sunken garden in Umpherston Sinkhole

One of Umpherston’s resident possums paused for a close-up

With some regret, we drove straight through the South Australian wine country (note to self: go back to South Australia to hang out in wine country). Our next destination was Kangaroo Island, an offshore getaway with more summer homes than permanent residents, but – in spite of getting there a week before Christmas – we found it idyllically quiet, if surprisingly cold. I’d been in Australia week at midsummer, and I was living in my merino hoodie.

Regardless of the weather, Kangaroo Island is a perfect Australian mini-holiday: fabulous beaches, a huge national park, excellent food and a guarantee of seeing wildlife. I saw more kangaroos on our first evening than I’d seen in my life, and pelicans, black swans and koalas soon joined them (if not in circumstances where I could get a photo of them). If the animals are shy, the island is ridiculously photogenic: pristine sand, big surf, remarkable geological formations and gorgeous trees.

The secret beach at Stokes Bay 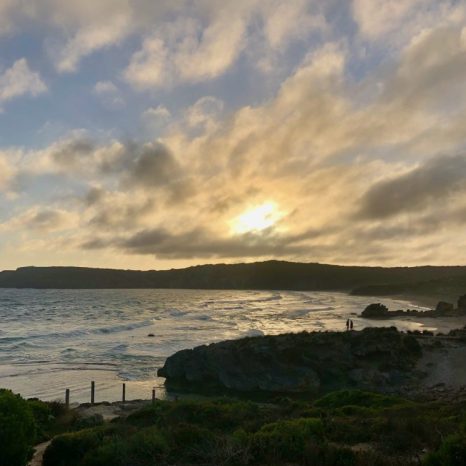 Pennington Bay is perfect for a windy sunset

The closest we got to a platypus, sadly 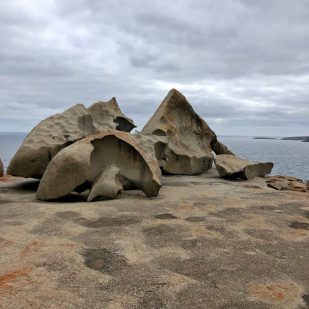 Honestly, we could happily have spent longer on Kangaroo Island, but my top tips are food-based: the chippy at Kingscote petrol station served me the best fish & chips of my life (and that’s saying something); the chef at the Mercure in American River appears to have Michelin ambitions at odds with the chain hotel vibe (the atmosphere is weird, but the food is divine); and we had a blast letting our hair down with the local residents at the Thursday night Thai food truck party. If only it had been warmer…

…and hooboy was it about to get warmer. We were heading to the Red Centre.