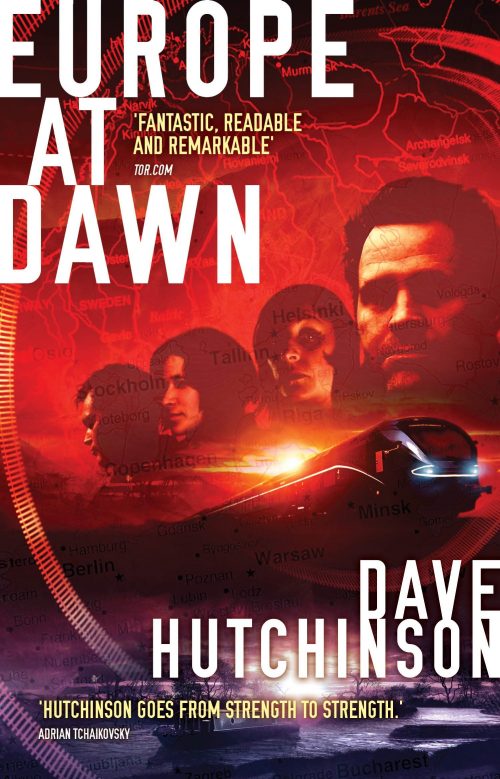 Europe is little more than a myth. Even the Line has disappeared into its own pocket universe. Heathrow has moved to the Community. And a mathematician with the ability to unzip reality and deliver a dirty bomb through the rip may have fallen into the wrong hands…

Europe at Dawn introduces two new characters discovering that the world doesn’t work the way they think. We meet Alice at the Scottish embassy in Tallinn; her days spent organising events for visiting Scottish artists and musicians, her nights spent avoiding conflict with her nightmarishly controlling husband. It took a while for me to realise that – as far as the broader chronology of the series goes – we’d jumped back in time; Europe has only just begun to fracture – along with Alice’s life.

Before she knows it, the folk duo she’s babysitting have been assaulted in a bar, she’s ‘lost’ a religious relic brought to her by two dodgy Estonians (yes, join the dots) and a mysterious female caller called Victoria is urging her to go on the run rather than accept the arbitrary consequences the Ambassador wants to mete out.

I liked Alice a lot. She’s put up with hell for a long time, but when everything falls in on her she stands up for herself, determined to make her own way out. She is far more capable than I think she gives herself credit for, and I enjoyed seeing her blossom once freed from her stifling husband and dead-end job.

We meet Ben trapped on an island in the Mediterranean, a teenage boy sold on the dream of Europe but unable to get any closer. As you’d expect from Hutchinson, it’s a scathing commentary on European attitudes to immigration and aid efforts; and as Europe falls apart, the islanders – penned in by the UN – are at the mercy of a local thug and the aid agency of the month. Ben too takes his life into his own hands; and his metamorphosis is both more complete and more chilling than Alice’s (…although I couldn’t help wonder whether Alice’s distrust was misplaced paranoia, unwilling to believe that this amiable man could really be a cold-blooded killer).

In some ways, the first couple of acts of Dawn read almost like a series of short stories (“So You Wanted To Know More About Life As A Coureur, eh?”) recounting episodes from Alice’s and Ben’s lives. In doing so, it spans the period covered in the first three books – although it feels at most tangentially connected to them. To be honest, this just convinced me that I’d read a washing machine manual if that was Dave Hutchinson’s next effort. I was utterly absorbed by the down-to-earth dialogue and the spectacular throwaway details that are arguably just tinsel but somehow make the whole universe feel more real. While I found the indistinct chronology confusing – I never knew when we were – I soon stopped worrying about it and trusted the narrative. It was the right choice.

The eventual re-introduction of Rupert (who is up to shady dealings of his own) and an appearance by Rudi as a young Coureur begins to tie Dawn back in and to hint that all this set-up will come together in a ‘current’ day crisis. Rupert has neither forgiven nor forgotten some of the wrongs done by the Community; the Community are increasingly paranoid that someone is moving against them (…with good reason); and it’s starting to look a lot like there’s yet another shadowy organisation pulling strings across Europe.

Rudi – older, wiser and definitely too tired for any of this shit – is ironically closest to being a neutral third party any of these organisations will actually deal with. But can he work out what is actually going on and defuse the situation before it turns into a horrific conflict?

With its chronological overlap and wide-eyed new cast, Europe at Dawn might almost work as an introduction to Dave Hutchinson’s post-flupocalyptic multiverse, but trust me, it’s the wrong place to start (it’s the last book, after all). Those tempted to jump in and roll with the spoilers may find they can make sense of (most of) the plot (good luck with the glorious, hilarious, awfully worrying Heathrow), but trust me, you’ll get more out of it if you read the series from the start . Besides, the first three books are really good, so why skip them?

In fact, I found myself wishing I’d reread the previous volumes before I picked up Dawn. While I thoroughly enjoyed Dawn on its own terms, I know some of the subtleties flew through the gaps in my memory – it’s full of sly call-backs and dry asides; rewards for the reader who has been paying attention. Still, finishing a book with a burning desire to reread the series from the top counts as a big thumbs-up, right? Right.

I find it hard to explain exactly why I love these books so much. I don’t enjoy spy thrillers, but many of the elements I love about Fractured Europe are lifted wholesale from the likes of Le Carre or Deighton: the world-weary operatives; the European locations; the everyday spy craft of legends, dead drops and border crossings. But perhaps what I love most is the sense that there will always be room for one more story. This is a world disintegrating into ever smaller units; there’s no way to tie it up with a bow so it can live happily ever after.

Europe at Dawn comes about as close as you can to resolving all the loose ends. But it can’t resist hinting at new dramas ahead. Dave Hutchinson is on record as saying this will be the last Fractured Europe book (of course, he’s said this before) and that “if I say I’m writing another one, shoot me” (…he’s said that before too). Still, he seems determined that this will be Rudi’s final outing, at least. I’m sad to hear it. I love Rudi for his low-key demeanour and casual competence, and I have enjoyed seeing him rise up to become an unwilling (and increasingly grumpy) power in this fractured landscape.

However, Hutchinson has also said “if it doesn’t have Rudi in it, it doesn’t count as a Europe book” – and hinted that he does indeed have ideas for future stories set in this world. Dawn certainly leaves itself wide open to its future, with a world that only gets more complicated by the day and another threat on the horizon. Which is arguably a little too close to reality after all, but I’m happy it might not be the end of the Line after all.

I received a free copy from the publisher in exchange for an honest review.