Top Ten Tuesday is was created by The Broke and the Bookish, and is now hosted by That Artsy Reader Girl. It’s all about books, lists and sharing the love we have of both with our bookish friends. It’s Hallowe’en season, so this week we’re celebrating the archetype everyone loves to hate (or loves to love, let’s be honest): THE VILLAIN.

I have a regular complaint when it comes to reading books (and watching tv / movies): I didn’t like the villain. Don’t get me wrong, I’m not saying a villain should be likeable. I don’t want fluff and good deeds, clever jokes, excellent tailoring and helping old ladies cross the road. So what do I want? Well, maybe the excellent tailoring…

Bigger on the inside

I’m picky when it comes to villains. I want dimensions. If the villain is killing puppies and making cloaks out of pensioners on top of trying to take over the world, I want a rationale (ideally without any monologuing). Chaotic evil can do one. It leaves room for nothing but fear and opposition. I’m more intrigued by Cersei Lannister than Ramsay Bolton; I’m literally just waiting for him to die, not excited to see what he will do before he’s finished (this may also be why I don’t usually like horror movies. That, and the gore).

You should meet my boss

Don’t get me wrong: I don’t want Something Even Worse out there ready for a sequel, but I’m generally more interested in servants and sidekicks rather than their evil masters. Sauron is oddly abstract compared to the self-interested villainy of Saruman (or, in direct opposition to my own argument, Morgoth. But then I’ve always been intrigued by Morgoth). Similarly, I’m less interested in the Dark One in the Wheel of Time than the Forsaken; or Arawn in the Chronicles of Prydain than Achren (🖤) or Pryderi. The end-game bosses are almost disappointingly simple after their more interesting minions. Maybe it’s that those who aren’t at the top of the Dark Pile have extra motivation. Maybe their self-interest makes them more relatable. Maybe I just like rooting for underdogs.

From a certain point of view

Given my opening gambit, it will come as no surprise that I love a villain who – when their eyes glitter as they sneer – you sort of agree with. I don’t have to feel sorry for them or (heaven help me) identify with them – but I want to understand them. Their cause doesn’t even have to be reasonable, so long as they sell it well.

What? I used to work in advertising. It’s all about a good pitch. Yes, go ahead, you can admire my soul – it’s the fourth jar from sunset, second shelf on the north wall.

All the wrong things for all the right reasons

I adore a villain I can leap to the defence of. A villain whose pitch almost sounds reasonable, but who quickly has you face-palming and yelling NO WHAT ARE YOU DOING STOP as they warm up. Think Marc Remillard’s ambition to accelerate human evolution in the Galactic Milieu trilogy); or Magneto’s plot to end prejudice by making everyone a mutant in X-Men. At it’s most extreme, my beloved Shuos Jedao of Ninefox Gambit (no means too extreme;

DON’T GIVE HIM A THRESHOLD WINNOWER). Or the bureaucratic villains of Cabin in the Woods – doing terrible things with bad grace and black humour, but they’re trying to save the world. Honestly.

Ambiguous in every way

…then there’s those people who you think are villains, but you’re really not sure how many ends they’re playing against the middle. Whose side are they on? What do they really want to achieve? These villains are usually super-smart, highly influential and utterly morally ambiguous to boot: the ends always justify the means as far as they’re concerned. I can’t help but love them for their ambition, their outrageous successes and their endless double-crossing. It probably helps that they’re usually sharply-dressed too 😉

OF COURSE I WASN’T JOKING

Although I’m deeply disappointed in my ability to find excellent full-length shots of villains wearing sharply-tailored suits or flowing loungewear, Loki will always come to my rescue. I prefer the iteration of this coat with just the shoulders (rather than the dangling lapel), but I love his diagonally-wrapped fabrics and the asymmetric cut of his tunic. Note: no cape, darling. Just an excellent swishy coat.

For the record, as far as I’m concerned Tom Hiddleston is Asmodeus in Aliette de Bodard’s House of Shattered Wings / House of Binding Thorns and not just because imagine him in a silk bathrobe omg.

I’m English. We have a long tradition of actors and actresses demolishing scenery in their commitment to hamming up a role. Make your on-screen villain big, bold, camp and over the top, and win my heart even if you fail every other test. Not sure what this looks like? Alan Rickman, that’s who this looks like – although Cate Blanchett is a mistress of the art and both Eddie Redmayne and Domhnall Gleeson have thrown down impressive gauntlets.

This goes hand in hand with the previous point, but let’s be clear: if you don’t enjoy being a villain, you’re just not as much fun. Consider the tortured angst of Kylo Ren. Now consider the wicked, whimsical exuberance of John Simms’s Master and Michelle Gomez’s Mistress. Which would you rather watch? This is another one that’s harder to do in print: it often seems absurd without a great actor or actress going for an all-out maniacal laugh to bring it home.

More in heaven and earth Horatio 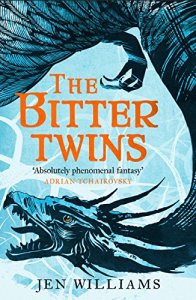 I know, I know, all my reasons for loving a villain so far are awfully anthropocentric. But give me a truly alien antagonist: a villain so far removed from humanity that I can’t attempt to understand or empathise with them – and you don’t always lose me at hello. It’s a risky gambit, but when it’s done well, oh my word. Sheer magic. These villains are creepy AF because you know there can be no reasoning with them; the drama is in the collision of worlds and the real achievement is when you find yourself wondering whether you mind who wins. This is a rare success for me – I take a lot of convincing – but Jen Williams pulls it off with style in The Bitter Twins. 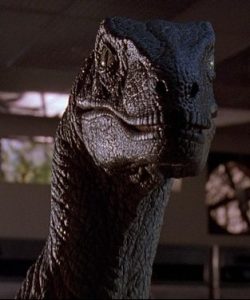 At Nine Worlds, (some of) the panel argued that velociraptors were antagonists, not villains. I think we’re splitting hairs at this point, and I’m happy to include creatures indulging in their natural instincts in my list. I may be influenced by my recent read of Mira Grants m(urd)ermaid story, Into the Drowning Deep – like velociraptors, the mermaids are intelligent and communicate with one another, but good luck trying to get in on the conversation before they eat you. In direct opposition to everything else I love, these villains require no motive, no nuance, no rationale and the only thing likely to get chewed are the rest of the cast. But I love them.

What are your favourite villainous traits?