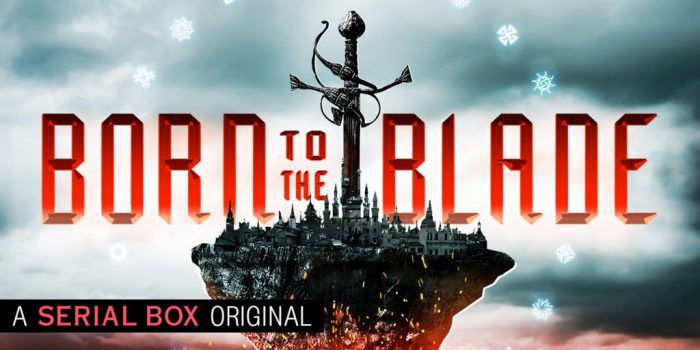 In an unlikely turn of events, junior Warder Bellona arranges an extravagant baby shower for Vanian battlemistress Penelope. With Lavinia on the war path and a flamboyant ship’s captain determined to show off, what can possibly go wrong?

Cass Khaw describes Baby Shower as ‘the fluffiest thing I have EVER written in my life’ – which was reassuring, as I’ve only ever encountered her writing as lyrically horrific. It was a comfort to know that I didn’t need to approach this week’s Born to the Blade with caution and a cushion to hide behind, although I’ll admit to wondering before the end whether certain people would survive the eponymous baby shower without being eviscerated.

Of all the people likely to throw a party in celebration of a rival nation’s Warder’s pregnancy, Bellona would probably have been second bottom in my list (just above Lavinia. No question of her doing anything for anybody, least of all a foreign rival. Although I sort of think everybody is a rival as far as Lavinia is concerned. Or target practice). But the Mertikan junior Warder sets to – with more determination than good sense and very little idea of what a Vanian might appreciate – but, and I feel weird even writing this, her heart appears to be in the right place.

That said, even Bellona’s attempts to honour someone come with a side helping of cultural superiority and inadvertently outrageous insults. After all, Vanian culture doesn’t have a concept of a baby shower, and Bellona’s ideas of what will be acceptable to a Vanian come through a distinctly Mertikan lens. And she’s certainly not considering Ojo’s role in all this.

The older Warder is heart-breaking this week, raw with barely suppressed emotion. He is trying so hard to keep his head, rebuking Kris when the would-be Warder oversteps the bounds (and oh, I loved that it’s such a socially precise way of letting Kris know they’ve erred; so little implied with so little said) and manipulating his understudy Adechike to distract him from Ojo’s interest and distress.

…but just what is Ojo distressed about? It’s tempting to think he’s brooding about Penelope (and there’s plenty of evidence for it), but there’s something else lurking too. This week the hints gather that my darling Ojo has terrible deeds in his past – but are they his or someone else’s? The murals on the walls of the embassy evoke for him the screams of a thousand dead countrymen, and I could think he’s weighed down by the thought of his sinking home; but at the party, Lavinia seems to accuse him of being a murderer and a liar. Just who did those countrymen die fighting?

It’s not the only little hint cast around of major storylines unfurling around the frothy insanity of the baby shower. Kris has – perhaps unwisely – shared Rumikan secrets with Adechike; and Ojo is as concerned to hear that the Rumikans have found a way to increase the potency of aerstone molecule as well as increase its natural occurrence in their wildlife through changes in diet. On the surface, this sounds amazing – a sustainable way to increase aerstone supplies – but chemicals and processes are things that can be stolen. Or seized as spoils of war. Just how long will Rumika be able to hold on to their secrets – and their place at the negotiating table?

Because there can be no doubt from Lavinia’s verbal assaults at the party that she’d happily cut the world to ribbons. She’s got no gentleness in her. She smells of iron and blood as much as frangipani and flowers; she wounds her understudy as much in frustration as in punishment for Bellona’s drunken speeches. Why negotiate for access to something you can take by force? Here’s a Warder who Kris will have to at least survive – even if they can’t beat her – and then deal with using more guile than we’ve seen from the young aspirant to date.

…but not alone. As the old guard entrench in their mutual hatreds and needle one another with their histories (Lavinia and Penelope? Really? Or was that just a political alliance, rather than a sexual one?), new friendships and alliances are being built. And after Lavinia’s orders to Michiko, perhaps she will fight free of her loyalty to the Mertikan Empire after all… much to her grandfather’s approval.

The party was fun – and I’ve not even talked about the mischievous Herrok swinging from the chandelier! – but the politics is what I’m here for. And I get the impression I ain’t seen nothin’ yet.