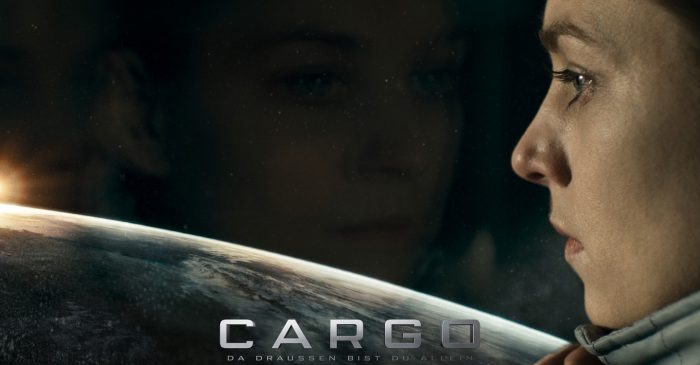 The Earth is dying. Humanity is living in slum-like orbital stations, tantalised by the promise of Rhea, a paradise only the wealthy can afford to emigrate to. Laura takes an 8-year mission aboard a cargo ship to earn her passage – but her duty shift is disturbed by strange noises and a glimpse of another person where none should be. Just what cargo are they carrying? And where are they really taking it?

Cargo is slick, Swiss science fiction – at least on a very small screen Well, it’s Swiss science fiction at any size, but I’m far from convinced the effects would hold up on a big screen (I watched it on my phone during a flight). However, I have a soft spot for grungy futures with lots of plumbing (blame Terry Gilliam) and for sci-fi that focuses on real people doing their jobs. Yes, I love Star Wars, but I like it when the genre moves beyond galactic warfare, shiny interfaces and big damn heroes. Give me a small crew with dirty finger nails and obvious internal tensions in a big old freight ship, and we’re off to a good start.

Consequently, I liked how procedural Cargo felt: a small crew of specialists, who spend most of their time in cryosleep, each taking a waking shift to… well, to keep an eye out for an alarm going off. Because there’s clearly nothing else they actually need to do – and Laura’s a doctor, not qualified to do anything but wake someone else up if something goes wrong on her shift… which of course it does.

There’s some light touch world-building up front that lets us know that Laura has family on Rhea (giving her an excuse to make lonely mid-shift video messages and feed us context); and that while most people dream of a way out of Earth orbit (to Rhea), there’s a terrorist group blowing things up to try and force people to confront the mess we’ve made of Earth instead. On the one hand, it’s practically a plot spoiler (gosh, I guess this will be relevant then) – on the other, when Laura’s shift is punctuated by dodgy plumbing, bumps in the night and a glimpse of a person in the cargo hold it keeps us firmly in the realms of thrillers when it could otherwise veer off into horror.

And once the action starts, it unfolds fairly elegantly, ratcheting up the tension as it goes. Cargo comfortably shifts gears from creepy almost-horror, to tense murder mystery, to political thriller as it gathers pace. It plays with tropes but it works them well, although I’ll spare a moment to admit that I’d have been yelling at the screen over the absurd romantic subplot if I hadn’t been on a plane.

However, the film lives or dies by how convinced you are by Laura, and I found her intriguing. She’s out of her depth, channelling Ellen Ripley here in the sense that she’s determined to do the right thing by the crew and the ship’s protocols (no aliens in this one). And she’s a joy to watch – understated, intense, committed.

The same can’t really be said of the supporting characters. They’re paper thin – turn sideways and they disappear – but I liked the crew regardless for its evident social stratification (again, look for the Alien call-backs) and unapologetic humanity. There was a moment where Prokoff and Vespucci’s actions made no sense whatsoever, until I remembered that they’re not underdog heroes – they’re self-interested grease monkeys out to make some money and earn a better life. I like that Cargo is unapologetic in having most of its characters stick to their paths single-mindedly.

…which isn’t to say it doesn’t have its issues, not least that the more you begin to think it through, the more narratively problematic it begins to seem. For example, let’s take the questionable nature of the evidence of what’s happening back on Earth (SPOILER (mouse over to read) …considering that Rhea is a simulation, buying into a habitable Earth on the basis of a video is a leap of faith at best), which really should have had more/explicit examination. I also had some frustrations with loose ends (SPOILER did the XO sabotage Laura’s fuel cell? Did Vespucci and Prokoff succeed in their plan?) and a few elements that just left me cold (SPOILER: Druckner felt like the wrong bogeyman; the romantic subplot would have been more bearable if Sam hadn’t died – there really wasn’t enough emotional investment for that to pay off; and the cheap thriller staple of one last jump-scare just when you think it’s all over).

In spite of these niggles, I still enjoyed this atmospheric space thriller. I liked that it felt practical rather than glamorous, and I do mean to rewatch it on a bigger screen. Here’s hoping it holds up.