@alice-mccoy and I went on holiday last weekend. We try to do this every year (and we mostly manage), and we upset our menfolk by telling them they can’t come along. This is our weekend to catch up, get things off our chests, snuggle up with strange cats, and – over the years – push ourselves to do something unexpected like climb a mountain or follow in the steps of @helpful_mammal.

This year, we started off with a lovely day in Bristol at the Harbourside Festival:

Yes, that sign really says ‘baby racing’. And yes, those parallel white lines in the background (click the photo to enlarge it) are race lanes made out of string to keep the babies in line.

We didn’t hang around to watch the racing; we were too intent on finding some food. Instead, we found the absolutely beautiful blue whale made up of recycled plastic. The whale was woven rattan style, with empty water bottles making up the waves (underneath the tail and all around it) and blue bottle tops for spray. It was hard to photograph and a great source of fun for the kids paddling in the pool beneath it.

After lunch, we sat on the quay and watched the angry ferries shuttling back and forth to the SS Great Britain, then took to the back streets for a wander.

Bristol is full of urban art and fond jokes. The bus stop on the left is mid-rise up a long stair between garden walls. A quick search on the internet returned a similar photo of the rusty pole with a sign attached to it outlining planning permission for a bus stop sign (which doesn’t look official – it has a Douglas Adams-esque reference to paperwork being available in the locked filing cabinet at the office in the basement). Up the steps to the left is World’s End Lane, wihch has the rather lovely sign on the right at the other end.

Thoroughly charmed, we went in search of ice cream and unexpectedly had an absurdly healthy dinner for the second night running before packing for our three-day trip to Dorset.

Not everyone in the family was happy to see us making plans to be off early the next morning.

With a little box of happiness in our bags (containing smoked bacon & cheddar sandwiches), we boarded an early train to Dorchester to start 3 days of hiking across the downs (why, why do we call such high things downs? They could have been ups, and we’d all have been happier).Dorchester has effectively been the county town of Dorset for about 2500 years – the Durotriges tribes who give Dorset its name had their chief settlement here in the majestic Maiden Castle.

@alice-mccoy and I spent some time contemplating the sheer scale of Maiden Castle’s earthworks, by which I mean it took us ages to climb them in spite of having fuelled up with cake at the historic Oak Rooms before we left the modern town centre. The Oak Rooms are most famous (not very) for being the ill-omened location where ‘Hanging’ Judge Jeffreys (rather more famous) sat in judgement over the Monmouth Rebels (poor Rebels). The wood panelling is still very impressive, but I suspect neither Jeffreys nor the Rebels got such good cake.

(coffee and walnut, with Earl Grey tea, if you were wondering)

Thankfully, we could recover from the climb up Maiden Castle’s ramparts with a bacon sandwich and a bottle of ginger beer. Planning ahead, that’s us.We stopped in at Maumbury Rings on our way out of Dorchester. Maumbury Rings is one of the best and biggest henge monuments in the UK, although it was extensively remodelled by the Romans (who saw huge circular banks and thought AMPHITHEATRE, as you do) and the Roundheads (who thought GUN PLATFORM. Err, as you do). Judge Jeffreys executed some of the Rebels here, but these days we’ve largely adopted the Roman tradition – when not being a historic monument, it’s a gig venue.

I pointed out the weird aspect of henges, which is that the ditch is inside the banks (no stone circles required, by the way. In fact, Stonehenge – even though it gave us the word henge – isn’t technically a henge monument at all as the ditch is outside the banks). This is the first clue that henges aren’t about defence – because a ditch with some stakes in it would make you feel so much better after your enemies have gained the enormous encircling high ground that you built. Sure, it’s better than nothing, but there’s a reason castle moats are outside the curtain walls.

Needless to say we have no real idea what they were for, so the blanket explanation of ritual significance is usually applied. This is almost certainly the case for some (hello Stonehenge), but is harder to prove for many – including Maumbury. We mulled it over and decided the internal stake-filled ditch made some sort of sense as a holding pen for animals – or, our minds having a darker turn to them, slaves. However, the sheer number of henge monuments around Dorchester (there are at least 3 others within 2km) suggests that the Durotriges either had a lot of stuff to guard or a lot of festivals to celebrate – not to mention a lot of spare time on their hands and a thing about earthworks.

Here’s the thing about going on holiday with me, in case you hadn’t guessed: I get excited by history and archaeology. Thankfully, is very understanding and she gets excited by flowers and birds, so we could share enthusiasms. The towering man-made ramparts of Maiden Castle – our next stop, home to the Durotriges and the biggest hill fort in Europe by ca 450BC – turned out to be an excellent spot for watching kestrels. And eating bacon sandwiches. 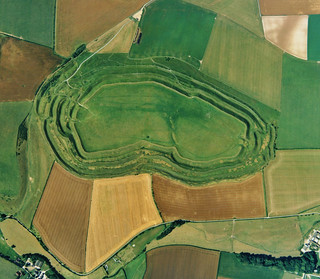 (photo courtesy of Dorset For You)

Realising the afternoon was slipping away, we shouldered our backpacks and set off south. We wound our way through the maze entrance (the wiggling earthworks on the left of the photo), imagining just how hard the hill would have been to assault unless you were Roman (I’ve been to Masada; the Roman Army could and would assault anything). The photo doesn’t really give you a sense of scale until you realise the little white triangle at the top is a car park, and the odd things in the bottom corners are farms. We admired the sheer blood, sweat and tears invested in it as we tried to find our way out, musing that it must have sucked to be a teenager in Iron Age Dorchester. ‘Don’t argue with me, boy. Those ditches don’t dig themselves.’As we approached the lane to the southwest, we heard the unmistakable clack of ball on willow. Sure enough, it was Sunday cricket at the village club. It was also the day for boy racers on the road, so we were glad to scurry across it and get back onto the public footpaths that would meander through barley, peas and meadows up to the South Dorset Ridgeway.

The South Dorset Ridgeway – not to be confused with the Wessex Ridgeway or The Ridgeway (yes, we’re original here, and yes that pretty much rules out me finding any appropriate photos on the Interwebs) – threads between Bronze Age tumuli of various sizes and decrepitude. We were overtaken by some intrepid mountain bikers as we picked our way around a collapsed badger sett, which is another one of those things that happens when and I go walking in remote places (err, unexpected mountain bikers, not badgers).

The collapse meant we had to detour from our planned route and our farm B&B wasn’t where I expected it to be, so the afternoon’s walk extended. This didn’t stop us taking an after-dinner walk around the farm, which got a little more exciting than we’d have liked as the bullocks were feeling frisky and entertained themselves by chasing us along the fence line.